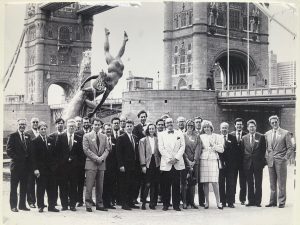 We are saddened to announce that one of the founders of our group Euravocat, Mr A. A.A. (André) van Rooij, passed away on 16 March 2020 at the age of 85 (on the first picture of our Group near the Tower Bridge in London: second to the left).

He was our first president in 1989 and was very involved and enthusiastic with the idea of setting up a partnership of European law firms.

He will remain in our memory as a sharp and powerful lawyer with personality, respected for his expertise, discipline and decisiveness.  He had an outspoken opinion and commanded respect. He handled high-profile cases, which later became known, such as the “Haviltex” case on the interpretation of contracts and “Maclou” on the liability of Trustees. Without exaggerating, it can be said that the Haviltex case was one of the most important decisions of the Supreme Court in Dutch legal history. From then on, the “contract is contract” rule no longer applied and many contracts are now open to a different interpretation if you can prove the intentions of both parties. And that’s obviously important and interesting for lawyers.

In the meantime, our network has grown into a powerful network of quality law firms all over Europe. We are grateful for his dedication!